Earlier this week, our family and the Burlings managed to sneak away from the city for a few days to the Pine Mountains. Denise and Shelley often catch up together during each week, but this was the first time that both our families could spend some time together since I started Seminary. 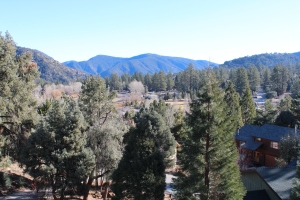 The Pine Mountains is approximately 1.7 million acres of pine forest, an hours drive north from our house in Newhall. It is home to all sorts of animals and wildlife – with the emphasis on WILDlife. It was strange to see signs around the small township reminding residents to not leave their small pets and children unattended due to the bears, mountain lions and coyotes. Needless to 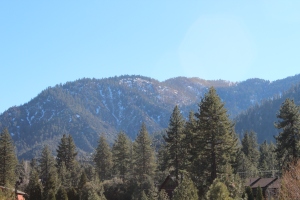 say, this wasn’t the place for explorative bush walks. Fortunately for us, it is not bear season as they usually sleep during the winter months.

The Pine Mountains is an area that normally gets some snow and being winter, we thought that we would see some, but the weather in Southern California is really quite special and something we are growing

to like very much – all year sun. The evenings and early mornings got very cold (20 degrees Fahrenheit), but by mid-morning the day soon warmed up to very comfortable levels. So much for snow! There was some remnants of an earlier snow dump, so on the way home, we stopped off for a bit so that the girls could play in what snow there was.

One thing we did notice about the pine forests, was that they were essentially just

that, pine forests. The mountains were quite sparse in some areas and not in anyway as dense as the New Zealand bush. It was still very beautiful though and you can’t help but marvel at the creative genius of our wonderful God who graciously allows us to enjoy His creation.

which we were able to rent at a discounted price – which suited poor students like us!  The house was on a hill which gave us quite magnificent views of the valley, the township and the local golf course. It was a relief to be able to take a break from apartment living, albeit for three days, to spread out, relax, play games, listen to music, go for walks (on the road) and sit around the fire at night roasting marshmallows.

It’s only a few days from Christmas and it is always good to be reminded of the whole point to Christmas – the birth of our Lord and Savior, Jesus Christ.

Last night, Grant and I took our families to The Church at Rocky Peak to go back over two thousand years in time by going back to Bethlehem. ‘Back to Bethlehem’ is a fantastic re-enactment of the town of Bethlehem the night Jesus was born. The reproduction was all done by the church and it had an incredible sense and feel of authenticity to it. 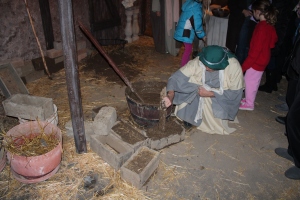 watch people go about their business; bakers baking and selling bread, potters working, people weaving baskets, tax collectors collecting more money from the townsfolk and Roman soldiers patrolling the town. But it wasn’t just a show that you viewed, there was lots of interaction between the actors and the crowd. The actors spoke to you as if you were from that time. Very cool!

Before you entered, you were each given some ‘shekels’ with which you could buy food or hand-crafted artefacts. Using your shekels, you could purchase bread, a miniature scroll (from the scribes), spices from the spice vendor, a clay medallion from the potter, some authentic food (such as goat cheese, pomegranates and dates) or of you were really keen, a smelly fish from the fish monger.

There were many things happening that mimicked life back then. 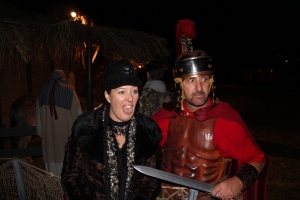 Denise got accosted by a Roman soldier, Maddy was not only hassled by the tax collector to pay her taxes (which she was told would cost her one of her arms), but she also got ‘adopted’ by the sheepskin trader. Once adopted, she was sent on an errand to go and buy some goat cheese for them. Maddy earned a golden shekel by spotting a ‘scroll smuggler’ and informing one of the Roman soldiers who

promptly arrested the smuggler. The inn keeper was a horrid person who kept informing people that there was no room available for the night. The kids could pet the sheep, goats, donkey and camel (where did they get that from?).

Some of the really funny interactive moments was the participation in the folk dancing and the Roman soldiers recruiting people from the crowd to try out for the Roman legion.

We ended the night in Bethlehem by queuing outside the stable to see Joseph, Mary and their newly born son Jesus, followed by a cup of hot chocolate (OK, so that part was not so authentic).

Overall, it was a great night out which all enjoyed immensely.

Being in the USA has meant that we have had to give up a lot of the things we love –  the hardest has been to give up our animals (including my Greenpeace membership). So when Denise found an amazing opportunity to have Victorias birthday party with a pack of wolves she jumped at the chance!

“Shadowlands” at Freedom Ranch is a small charity based foundation that aims to educate us misguided humans about the real details and behaviours of the misunderstood Wolf. Check out their website at:  http://www.shadowlandfoundation.org/

After driving through the Angeles National Forest Park for 1/2 an hour we arrived at the small 10 acre Freedom Ranch and were greeted by the spine tingling howls of  the Wolf pack. We were so surprised to see how excited they were,  there was no growling or barking, they were actually thrilled to meet us. Paul and Collette welcomed us also as we began an amazing day of discovery and learning.

We first had to be introduced to the pack and this involved being sniffed at both ‘ends’. Paul explained that the wolves could tell what we had had for breakfast yesterday, their sense of smell was so highly defined. Next we got to spend a few hours with them – feeding them , talking to them, patting them and being loved by them – what about all those myths that Wolves are vicious and dangerous! The kids were even allowed to hand feed them sausage, none of the wolves fought amongst each other for the food. We actually felt safer around them than we do a domesticated dog.

Paul and Collette explained to us that these poor creatures have had such a bad ‘rap’ and are hunted and killed throughout the US. There are only a few left in the wild (having been reintroduced) around Yellowstone National Park etc. Man has foolishly removed the wolf from the ecosystem and with that destroyed a lot of it. The wolf has a major part in our world, they keep the population of Deer, Elk, Buffalo etc down. With the demise of the wolf  these animals in turn have over populated their natural ecosystem and destroyed it. They eat vast quantities of vegetation which then in turn destroys the trees, some National parks have had no new trees grow there since the 1920s. No new trees means no shade for waterways which then dry up and make the place desolate… and the damage goes on! Please ignore all the bad press you have heard about the Wolf most of it is due to ignorance and other peoples agendas!

Our day ended with a picnic lunch outside in the lovely quiet countryside. The kids had plenty of room to run around and enjoy the space. Paul and Collette let the kids toast marshmallows over the fire, which they love doing – especially the boys who looked around for things to burn once the marshmallows ran out.

A huge thank you goes out to Paul and Collette for their hospitality, their time and sharing their precious Wolves with us. I’m sure we would all love to go back again!

One of the things we loved to do as a family each December back home in New Zealand was to wander around the various streets that were entered in the Christmas light extravaganza competitions. In the Hutt Valley, there was the occasional street that did this well, but normally there were only very small pockets of houses that would go all out with Christmas lights.
Sadly, in the last couple of years and as the financial down-turn hit families, the participation in these competitions have dwindled somewhat. 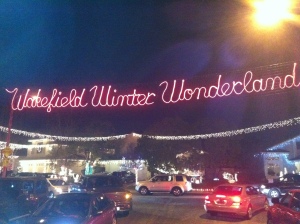 One of the things we were excited to see, was how the Americans would do Christmas lights on their houses. In movies and television shows, dressing up houses in Christmas lights was often portrayed as being a big thing, so we wondered if that was true or not.

Last night was Family night, so after making the now traditional Friday night trek to Menchies, we headed off to neighboring Saugus to see a particular street there we had heard about – Wakefield Court. We knew we hit the right street because of the mass of cars trying to go down or park nearby.

We weren’t quite ready for what we saw. It was magnificent. A huge Christmas light banner saying ‘Wakefield Winter Wonderland’ hung above the street entrance. Almost every house was massively lit up and decorated. Christmas light chains were strung from house to house over the street. This was amazingly effective.

There were residents in their driveways with their braziers lit, some of the residents were playing music (a couple with bands), giving out candy canes or just sitting outside enjoying the people coming through. All of these things created a real carnival atmosphere and we enjoyed it immensely.

Picture do not do the event justice. You have to see it! 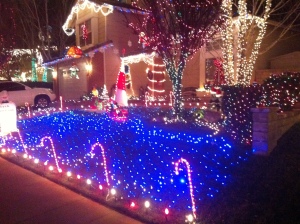 There is also a nice little story behind the wonderland. Apparently,  the tradition was
borne out of disaster when the residents in the street had supported each other  following the big earthquake of 1994.