The Master’s Seminary Spring Banquet is generally regarded by the students and faculty as one of the highlights of the year and I think this year was no different. We appreciated the banquet which allowed us to have an elegant night out together whilst fellowshipping with my fellow students, their wives and various members of the faculty away from the context of the seminary. The location of the spring banquet was the Ronald Reagan Presidential Library and Museum in Simi Valley.

Our day started with a tour of the Reagan Presidential Library which is a massive
complex measuring over 243,000 square feet and was built in honor of the much loved and popular president. With many fascinating exhibits on display, the library traces Reagan’s life and career from his early beginnings in Illinois, his
radio broadcasting and acting careers to his time as Governor of California and 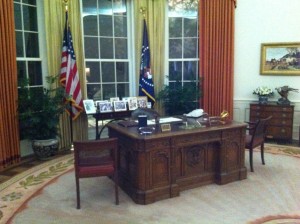 President of the United States. We allowed ourselves two hours to walk through the museum, but in reality, we needed much more time as there was much to read and see. Some of the more interesting exhibits was the suit, complete with bullet holes, that was cut away from Reagan’s body whilst in hospital after the 1981 assassination attempt on his life,  a complete full-scale replica of the Oval Office modelled on the year

Reagan left office in 1989, items from his presidential retreat in Camp David, and finally, the amazing Boeing 707 which served as Air Force One during Reagan’s administration.

The forty-year old Air Force One aircraft is permanently housed in a 90,000 square foot hangar and was in operation between 1973-2001, serving seven presidents: Nixon, Ford, Carter, Reagan, Bush Snr, Clinton and Bush Jnr. It was quite a buzz to be able to take a tour through the Air Force One, although we weren’t allowed to take photographs inside the aircraft. In the hangar, there was also a presidential parade limousine, a secret service vehicle and LAPD police car
and motorcycles from the mid-1980’s. Very cool exhibits.

As well as the Reagan exhibits, there was also an exhibition on the Berlin Wall and a new one (for a limited time only) on George Washington. This very nice exhibition had over 100 original Washington artifacts (they even had his dentures on display) and several life-sized figures to help explain his life as a land-surveyor, a farmer, and shrewd entrepreneur as well as President. These exhibitions gave us a good insight into the lives of two of the most well-respected and important U.S presidents in American history. We are grateful for the opportunity.

After the tour through the library, we were served hors d’ordevours on the patio of the presidential library which overlooked Simi Valley and allowed us to mingle with fellow students and take in the breathtaking views. From there we had dinner which was really nice with great food and marvelous company. The table we were on was a real international affair, consisting of an American (Dr. Harris), two New Zealand couples (including us), an English couple, a South African

couple (lekke) and a student from … oops, his home country escapes me. Sorry Alex. Between courses we listened to a challenging message from guest speaker Dr. R. Kent Hughes who charged us to keep the faith and a good conscience.

We enjoyed the evening immensely and rounded the night off with coffee with a few other couples. It was a pleasure and a privilege to attend the TMS Spring Banquet and we will definitely be registering for the same event next spring.

This entry was posted in Seminary. Bookmark the permalink.