Alcatraz Island was perhaps the highlight of our week in San Francisco.  I’m quite certain that prior to 1963, the year the penitentiary was closed, Alcatraz was not a popular destination, but today, it is one of the biggest attractions in the San Francisco area.  Over the years, much has been said about the lives of the inmates in Alcatraz.  The movies that have been made and the stories of the various escape attempts have all added to the legend and mystique that is Alcatraz.

One of the great things about the trip to Alcatraz, was that even though there is only one operator, there are multiple sailings each day, so once we got there, we were free to spend as much time as we wanted, then catch any one of the various sailings back to the mainland.  We opted for the earliest ferry in order for us to make the most of the day.  The weather was beautiful so we had a nice, slow cruise across the bay to the island. 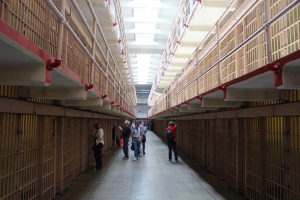 It was a thrill to finally set foot on ‘The Rock’.  It served as a federal maximum security prison from 1934 until it’s closure in 1963 due the age of the buildings and also a change in philosophy in the way prisoners were handled, i.e from punishment to rehabilitation.  Alcatraz housed some of the most notorious criminals of the day, including a certain Al Capone but perhaps the most famous prisoners were the one’s who escaped in 1962: Frank Morris and the Anglin brothers. The story of the escape is captured well in this Clint Eastwood movie, but it was thrilling to see the actual cells in which they lived and the holes that the men dug to get out.  Very cool!

The walk around the cell house was greatly enhanced by the audio tour.  With our own listening device and headphones, we were guided through a fascinating tour of the cell house, narrated by actual former inmates and wardens.  The Alcatraz experience was really brought to life.  We highly recommend this.
However, one of the things that struck me, was the size of the cells – a very small 5 x 9 feet! 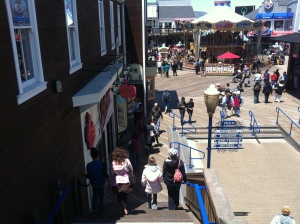 When he got back to the mainland, we spent the rest of the afternoon walking around Pier 39 and Fisherman’s Wharf.  Pier 39 is a bustling area of shops and activity. It really does take a whole afternoon to make your way around and it is  fascinating to visit.

On our final day, we were hoping to visit some of the gardens around the city, such as the Golden Gate Gardens, the Botanical Gardens, the Japanese Tea Garden and Muir Woods, but they all cost $7 for each person to enter.  Instead of paying $30 for the privilege of looking at trees and flowers at each garden, we decided to head back across the Golden Gate Bridge and drive to Mill Valley, which is a thriving artistic community about 14 miles north of the city.

On the way there, we visited the very eclectic and psychedelic Haight-Ashbury district which was known for it’s hippie culture and rock’n’roll lifetsyle in the late 1960’s.  In fact, well-known artists such as Janis Joplin, Jefferson Airplane and the Grateful Dead all resided, and I guess partied hard, in this area.

Relaxing in Mill Valley for the afternoon was a fantastic way to finish our short stay in San Francisco.  The next day, we spent 8 hours traveling back L.A. via the very scenic 101 freeway.

A Week in San Francisco – Part One

After two hectic weeks in summer school, we headed to the Bay Area in Northern
California to spend a few days in San Francisco. It was an 800 mile round trip, but one which we enjoyed immensely.  Personally, I have long held a slight fascination for San Francisco: the 60’s music scene, the Golden Gate bridge and Alcatraz prison.  But perhaps my interest was initially tweaked as a child growing up on a diet of Steve McQueen movies and those memorable car-chase scenes featuring ‘The king of Cool’ tearing around the streets of San Francisco in a 1968 Mustang in the movie ‘Bullitt‘.

One of the things we were advised to pre-book well in advance was the day-trip to Alcatraz Island.  There is only one company that is allowed to land on Alcatraz Island and it is impossible to turn up on the day and expect to get on the boat unless you have pre-booked at least one week ahead.  So, with accommodation organized (we decided to stay in San Bruno which is only a twelve mile drive to the city center) and the alcatraz trip already booked, we headed up the 5 freeway for the six-hour drive to San Francisco.

Our immediate impression of San Francisco was it was a lot like our home city Wellington.  A city built around a harbor, the all-too familiar cool sea-breeze (at times the wind was really cold) and the Victorian-style housing built very close to each other.  Certainly the climate was noticeably cooler than what we have been experiencing over the last couple of months: late 80’s degrees fahrenheit in L.A compared to the early to mid-60’s in San Francisco.

The first thing we did was drive across the iconic Golden Gate Bridge then walked around Sausalito, browsing through the dozens of unique boutique stores in the main area and taking in the fantastic views of San Francisco city from across the harbor.  Apparently, Otis Redding was staying in Sausalito at the time he composed “Dock of the Bay” and we can understand why.  It is a very picturesque part of the San Francisco Bay area and a nice relaxing way to end the day.

The next day was spent in the city itself as there were many things we wanted to see there. We managed to find some really cheap parking in the city near Pier 39 where if you got there before 9AM, you could park all day until 11:59PM for only $10.  After checking out the sea lions camped out at the West Marina at Pier 39, we headed towards the cable cars. Our plan was to catch the cable car to Chinatown, then hike back to the top of Lombard Street, walk down Lombard toward the Marina area, then make our way around the piers.  This involved a lot of walking so I was very grateful that the Lord kept any gout attacks at bay.

Being from Wellington, we are not completely unfamiliar with cable cars, but it was fun to ride on the famous cable cars of San Francisco through the city center.  We took the Powell-Mason car to Chinatown and for a while I could ride the cable car standing on the side running boards. What fun.  Even though Chinatown in San Francisco is a relatively short eight blocks long and a couple of blocks wide, it is the largest Chinatown outside of China itself.  I think we got there a little too early in the day, as most of the stores were still closed (or were in the process of opening up as we wandered through), so we mainly looked through the stores that were open and snapped a few pictures of the area.

After Chinatown, we headed uphill toward the top of Lombard Street, known as one of the crookedest streets in the world. The crooked section of Lombard is about a block long but very well decorated with colorful plants and flowers.  Once we got to the top, there were bus loads of people stopping and taking pictures of the street, but at times, the sight-seers hindered residents and other car traffic by refusing to step off the road to left them through. Pretty rude if you ask me.

After we walked down Lombard Street, we wandered down to the waterfront and then to Ghirardelli Square, which is a pleasant shopping area (but full of mainly souvenir-type stores) based in what used to be an old woolen mill from the mid-1860’s.  Ghiradelli is the name of a chocolate brand and in the square, among others, there is a Ghiradelli chocolate store and an ice cream shop.

At the end of the day, we were exhausted having completed so much walking but we did get to see a lot of the city. We were very much looking forward to the next day which was our trip to Alcatraz Island and a tour around the famous prison.