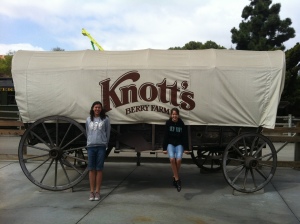 With Maddy’s birthday this week and Victoria’s recent 15th birthday, Denise and I planned to surprise the girls with a trip to Knott’s Berry Farm to celebrate their respective birthdays.  So, yesterday morning, we woke the girls up relatively early and informed them we were going out for “a walk.”  A  short while later, and after a quick stop at Macca’s for some breakfast, we embarked on the one hour drive south to Orange County.  Our destination was still unbeknownst to the girls.

Once we pulled into the park, the game was up and huge smiles adorned the girls faces.  We actually couldn’t have picked a more perfect day, as being a school day, the lines were short, almost all the rides were open, and the weather was typically beautiful. 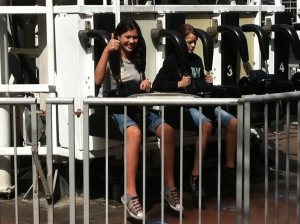 The park, based in Buena Park, California, started in humble circumstances in the 1930’s.  Walter and Cordelia Knott began selling fried chicken and such was the popularity, people used to line up outside their door.  Wanting to entertain the waiting customers, Walter built old-west themed attractions.  From there the park expanded to where it now has over 165 rides and attractions.

We really had a great time.  It seemed less hectic that other parks, there were more rest areas and there was a greater variety of attractions.  The park is essentially divided into six differently themed areas spread over approximately 150 acres, which is all very comfortably walkable.  The rides we enjoyed the most were the Ghost-Rider, the Xcelerator, the Silver Bullet and the Stagecoach ride.  But just walking around the Old-west themed attractions was equally fun.  The day ended in fantastic fashion, where in the open-air Wagon-camp theater, we watched the live Western stunt show.  This was my personal favorite part of the day, and one which we all enjoyed immensely.

We are thankful that we could celebrate the birthday’s of our girls at Knott’s Berry Farm.  They are precious to us and a much welcomed gift from God.  They are growing fast, and continue to be a blessing to us.
May God continue to bless our daughters richly.