This past weekend we took a drive out into the middle of the Mojave desert with our good friends, Dan and Julie Hovey, to visit a living ghost town called Randsburg.  The town is off the beaten path, about 2 1/2 hour drive north of LA, and just off the historic 395 highway.  It sits between Death Valley and the bottom end of the Sierra Nevada.  In fact, Randsburg is one of the few living ghost towns that still remains in California, and not surprisingly, the town is less busy during the week, where it resembles an actual ghost town, but is more lively during the weekends.

Randsburg was established in 1895 when gold was discovered in the surrounding mountains, by three men: John Singleton, Charlie Burcham, and F. M. Mooers,  and even today, it still bears some of the buildings that were built in to the late 1890’s.  One of the oldest buildings in Randsburg is the Post office which was built in 1896. 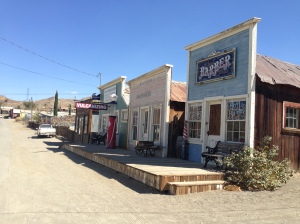 Since the town is in the middle of the desert, Randsburg is more preferrable in the Fall when the weather cools off, than it is in the heat of the summer months.  It is it is popular for historians interested in the gold history of California, as well as being a common destination point for off-road vehicles and dirt bikes.  In fact the Navy Seals do some training there in order to become acclimated to real desert conditions in the event of a deployment. 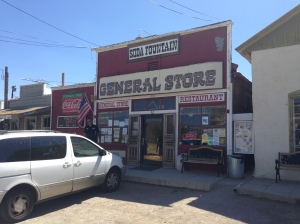 The Randsburg General Store, which has been running continuously since 1896, is a good place to meet, to have a meal and to wash down your burger with an old-fashioned phosphate soda. The General Store is known for its long counter and stools, which are all original to 1904, and which is also the same year that the soda fountain arrived.  The main street, called Butte Avenue, also features a real western saloon, which is still active today, a couple small inns, a museum and several antique stores.

This entry was posted in Family, Vacation. Bookmark the permalink.