Yesterday, we took the morning to visit a couple more filming locations of the classic 1984 movie, The Karate Kid.  You can find Part 1 of  our visits here.

In the previous post, I mentioned that there was actually two separate filming locations for the Cobra Kai dojo.  In Part 1, I discussed one location, and yesterday we visited the second dojo location, which is found in the center of LA.

This is the corner of Wilshire Blvd which was the dojo, opposite to where Daniel and his mother were having a meal.  This is how it looks today (unfortunately, and going from memory, I did not get quite the right angle – Gah!). 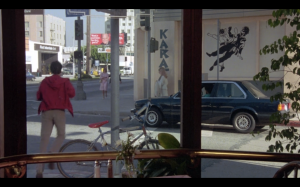 This is the same corner of Wiltshire Blvd as it appears in the movie.

In the movie, the restaurant in which they were eating was called, “The Orient Express,” and this is what is looks like today.  It is now called “Express Restaurant and Club.”

We found the Golf n’ Stuff in Norwalk, LA.  Amazingly, much of it is still intact, including the mini-putt golf and bumper boats.  Here is a shot of the car park area today. 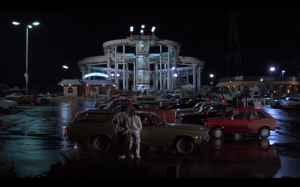 Here is how the same car park looked in the movie. The glaring difference is the removal of the water slide since. You can just make out the electricity tower to the right 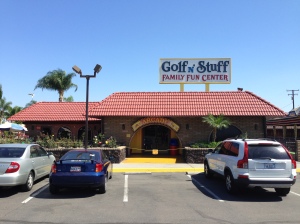 This is the main entrance today.  This arcade is now closed on weekdays, so we could not go in and see what it looks like inside.

Here is how it appeared in the movie.

And again in a later scene. 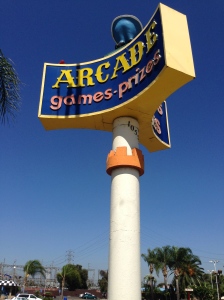 Even the main sign at the front of the park is still there.

This is a glimpse of the same sign in the movie.

This entry was posted in Family, Vacation. Bookmark the permalink.